Sturgeon Lake, a Y-shaped water body, has the communities of Fenelon Falls, Lindsay, Sturgeon Point, and Bobcaygeon at the north-west, south, central, and north-east points of the Y respectively. Its easy access to services in these communities has made Sturgeon Lake popular with year-round residents, and waterfront property prices tend to be higher than average for the region. The lake is roughly 16 miles from the southern to the north-eastern extremes, and averages about two miles in width.

Sturgeon Lake is located in the relatively narrow belt of limestone topography that lies above the livestock and grain farmland to the south, and the Precambrian Canadian Shield country to the north. The limestone topography dictates the type of waterfront found on the lake - lots are most often level, and generally not steep to the water. Shorelines can be rocky (limestone boulders) or sandy, with older cottages often having concrete retaining walls.

Landscaped lots with lawns and gardens are common. Insects tend to be less of an issue than in the Precambrian region. Water levels remain relatively constant throughout the year.

Sturgeon Lake is home to a range of game fish species, which includes small and large-mouth bass, walleye, and muskie.

Depth: 10.6 metres at the deepest point and on average is about 3.9 metres


Photo of Sturgeon Lake, Ontario by: Comms staff - No alterations made, Creative Commons

Get Directions to Sturgeon Lake

Depth: 10.6 metres at the deepest point and on average is about 3.9 metres

We have a great appreciation for the history of the lakes we service, and are pleased to share with you some of the heritage postcards we have collected. 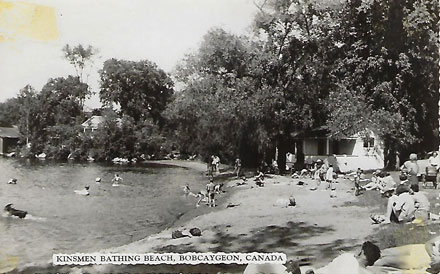 Recognize, know a story or details about these vintage Kawartha scenes? Join us on facebook and instagram to share! We would also be delighted to share your heritage photographs and related stories - please email to David.